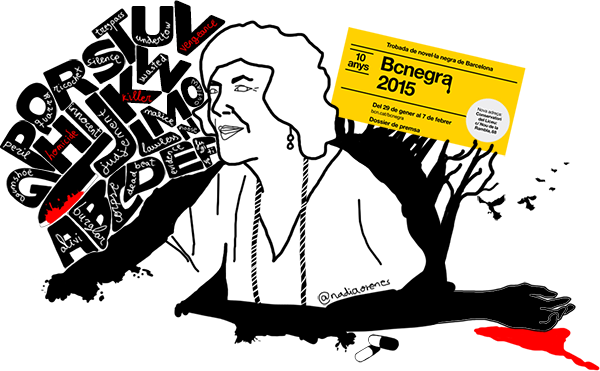 The participants of the previous round table said it half-joking: she is the real reason why BARTS hall is packed. She is Sue Grafton.

I haven’t read a single one of her books, but I attend to the event with the intention of learning something useful about Writing, or maybe just to satisfy my curiosity. Because when I read the biography of this American writer and discovered that she has been carrying on with such a singular project as the “crime alphabet” for 33 years, I told myself: “This has to be worth it”.

For those of you who don’t know what I’m talking about, it happens to be that Sue Grafton started, when she was 42 years old, to publish a series of crime novels with one thing in common: each of them would be titled with a word starting by each letter of the alphabet. All these words would be related to the world of crime, and they would work as a motif or theme for each novel. Besides, all of them would feature the same character, private investigator Kinsey Millhone, and would be set in the same place, the fictional town of Santa Teresa (in California).

Since the appearance of “A is for Alibi”, Grafton has been publishing each of her 26 books at a more or less annual rate, and the latest chapter, “W is for Wasted”, was published in 2013, when she was 72. Now you are probably doing some macabre mental calculations, but don’t feel bad: I did too, and many more did before us, because the author herself joked in the interview about the fear that the monumental project could remain incomplete even after having reached this point.

A list of Grafton’s books, and its sometimes clever (sometimes not) translation into Spanish.

Sue soothes her fans in the room announcing that she is finishing her next novel right now, and that she has started taking long walks in order to stay fit. By the way, it’s not the first time I hear or read that a writer is fond of long walks.

The questions of Toni Hill (the interviewer) are general and predictable, but they satisfy the curiosity Sue awakes on us. For example, wasn’t it a little bit pretentious to embark on a project like the alphabet series? Or what is the same: what makes you wake up one day and say “Well, I think I’ll write 26 novels over the next 26 years, each of them titled with a word beginning with each letter of the alphabet”?

Grafton explains that, in fact, when the series began back in 1982, she didn’t have any idea whether she would be able to finish it or not. There were many skeptics that labeled her as arrogant, but she felt she had the energy to try, and she has always been the kind of person who has fixed ideas, so she didn’t feel overwhelmed by the idea of being tied to a single project either. In any case, she started on the right foot, because she got 10,000 dollars for the first manuscript.

For all that I have learned from this author so far, I think she is one of those examples where success has been built through hard work and persistence (methods which, by the way, not always guarantee success). 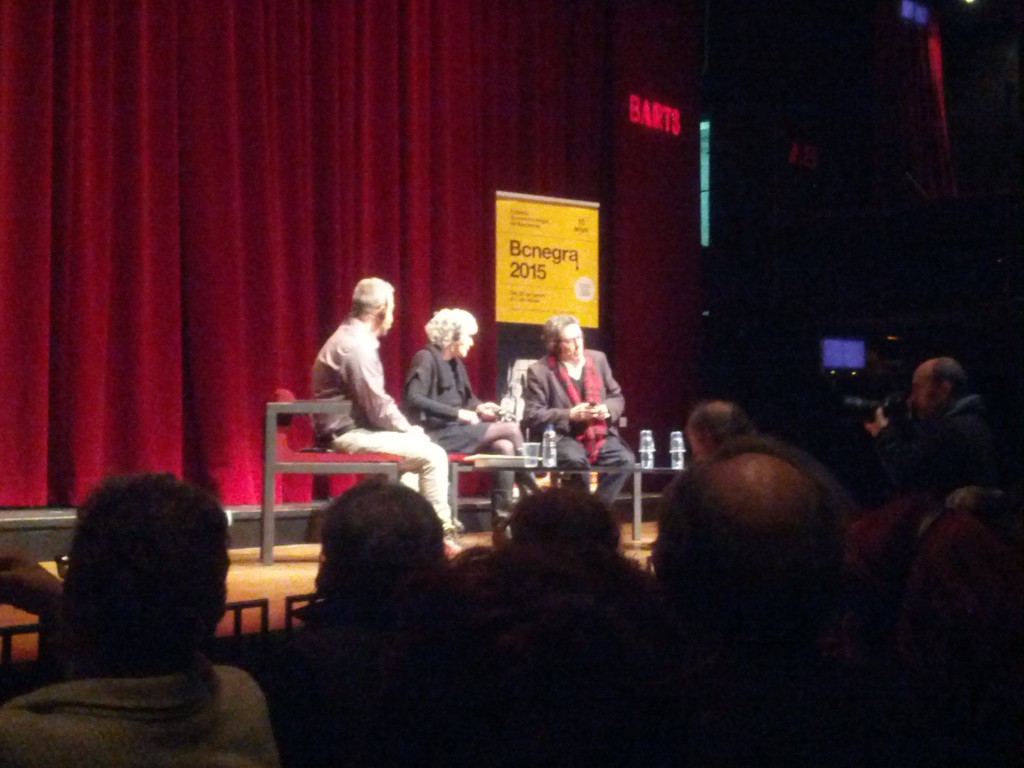 The thing is that Sue graduated in English literature with a minor, and according to her own words, she never had remarkable skills. Then she began to write, and there weren’t one or two, but three the attempts she had to make until she was published.

Then Hollywood came. At first everything was exciting and wonderful, because she could see how the work of 400 people was articulated around her creations. But she began to hate the system over time, and when she considered her integrity had been sufficiently beaten, she abandoned the industry.

She must have left with a really bad taste in her mouth. According to her own words, she has received several proposals from cinema and television to adapt her stories since then, but she has always declined, because, “how would I make such a mess of my work? “. She insures not being interested in money or in others taking control over her life, nor on the hordes of followers stoning her when they don’t like the cast.

After leaving Hollywood, Grafton was broke, but she had an idea. She had divorced for the second time, and her imaginative nature was leading her to think about scenes where she liquidated her ex-husband. Doing it “in real life” wouldn’t have been feasible, because the police would have arrested her right away. But there was a less risky and more entertaining way to give free rein to her fantasies, and this was, you guessed it dear reader, putting it down on paper. 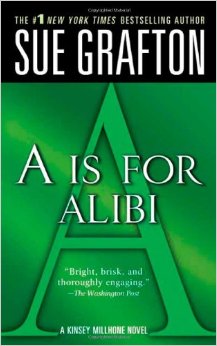 Cover of “A is for Alibi,” the first book in the “alphabet crimes” series.

Sue Grafton and Toni Hill speak for a while about the similarities between the author and her main character, who is an incarnation of the “old-fashioned” private detective. Although time passes for Sue Grafton and for the readers, Kinsey Millhone remains stick to the 80s and its old researching practices, such as visiting archives, going to trials, or doing face to face interviews.

I agree with Sue Grafton that getting lost in endless corridors full of police files is much more exciting than scrolling down a pdf or googling the name of a suspect. But I also think that, for a writer, that is the easy way. I’m not calling Grafton a lazy, but trying to make entertaining an investigation where today’s telematic facilities are present, could be far more interesting. Of course, something like that would result in fewer opportunities for the typical investigator to show off, but it would also require a smarter criminal. Interesting, isn’t it?

If you know about any stories where something like this happens, please leave it on the comments below. I’m curious.

Anyway, it’s not a coincidence that you can find, among Grafton’s literary references, “old-fashioned” authors, such as Raymond Chandler, Ross Macdonald, and other classics of Hard Boiled, a genre in which I have not the slightest interest, because every time I have tried to read it, I’ve been stunned by the high concentration of clichés per page.

Now, and I know I’m being politically correct here, but I suppose these genres have left a legacy for the later literature, and without them, today’s murder/crime/mystery novels wouldn’t be what they are, nor would the writers be who we are, etc., etc.

Finally, and speaking of modernity and “old-schoolness”, it turns out that Sue Grafton is an active Facebook user who enjoys exchanging messages with her fans, although she said in the interview, making a reference to trolls, that she doesn’t understand why is there so much hate on the Internet (I don’t get it either).

Time runs out and the talk ends with the audience putting everything in one last applause, because listening to Sue Grafton has been a comforting experience, and one is always glad that working and talented people succeed, and that they are still humble and grateful to their audience.

*By the way, as I said, I haven’t read any books of this author so far, but if anyone has any suggestions of a letter of the alphabet where I could begin, I would appreciate a comment.

Sue Grafton’s web (www.suegrafton.com): old-fashioned, as Kinsey Millhone, but with interesting things like pictures of the writer’s office, or links to buy things such incredible like this:

All Sue Grafton’s book signed by the author.