On these Attention War days, where everything’s eye-candied and stunning visuals try to stand out in the noise, Thomas was Alone comes as a rarity.

This is definitely not one of those games that sells itself on the screenshots: 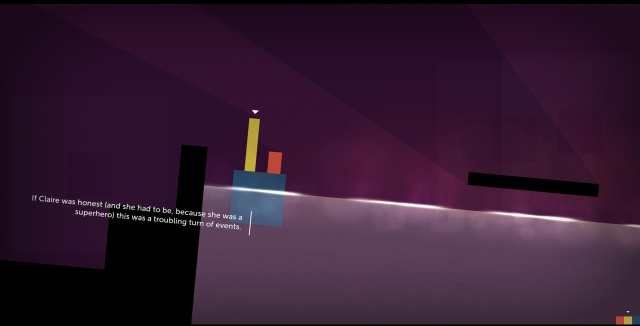 And don’t misunderstand me. I find the art direction of this game to be quite sophisticated in its simplicity, but its visuals, including both environments and characters, rely the appeal of the experience on abstraction.

What is the game about?

It’s actually… about whatever you want it to be!

With abstraction I mean the experience is not effortless, because the player needs to constantly fill the gaps by picturing in his mind the non-existent character expressions, and trying to figure out in which way does each puzzle tell something about their relationships.

The benefit, however, is enormous. You as a player add up to the story and to the characterization of the characters, and you find yourself surprised about you own choices and the way you start caring about the story. 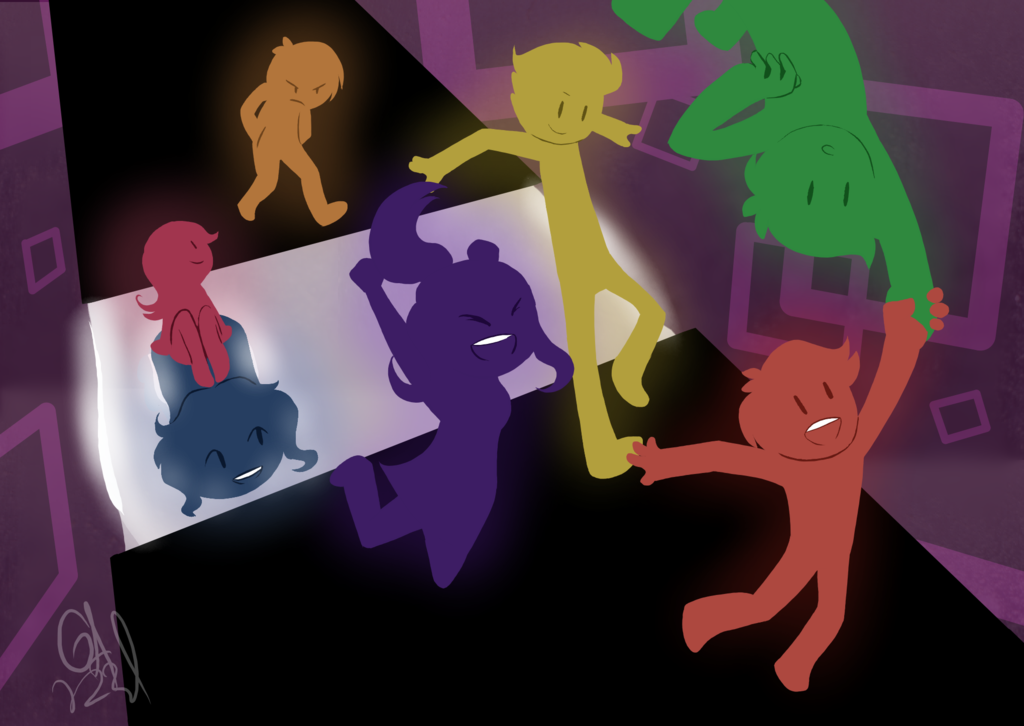 Fans indulging to the need to complement and interpret the minimalist design and art of Thomas was Alone. Source: Gameaddict1234 on DeviantArt

Besides, the fairly imprecise monologue gives you the material to make your own associations with the topics hinted here and there, like friendship, loneliness, or equilibrium. To sum it up, you complete the story with your own interpretation.

That doesn’t mean the game doesn’t have a plot going on, though. At the beginning of chapters we get to read some bits of journalistic testimonials that hint a story background that’s actually quite mysterious.

The other main source of narrative on this game is the inner voice of the characters involved in that plot, which is made explicit by an external omniscient narrator.

Using a voice over, both in films and in video games is always risky in the sense that it might spoil the subtext and take away all the mystery. Here, however, each level introduction gives away just enough so as to trigger the player imagination and constantly renew interest.

So here I introduce you to… Claire, John, James, Laura, Chris, Sarah and Thomas! Humble geometric shapes with humble names!

As a result, you start getting more and more engaged to the inner adventures this little fellows go through, which reach deep levels by covering emotions and conditions like self-esteem, OCD, or loyalty. And surprisingly, Thomas was Alone doesn’t just present an original premise, but it also develops a whole story arc with a coherent and thematic division into chapters.

The guys who wrote this stuff know how to design a story, and they make a good use of mechanisms as archetypes or multiplots. It couldn’t have been possible in other way, because you need a strong story foundation if you want people to see colored squares and rectangles as something else.

It’s truth, however, that the human touch is empowered by some resources, such as sound effects that actually work as voices, a suggestive soundtrack, an eloquent voice over, or carefully weighted animations that give very specific traits to each character.

The good news is that Thomas was Alone also happens to be a brilliant platform game with minimalist puzzles that deliver a strong and enjoyable long-standing experience. New characters and the mechanics associated to them are gradually unlocked giving a varied and well-balanced gameplay.

So this is it. If you want an interactive experience that can only be enjoyed retrospectively, or if you want to witness the narrative trick these magician designers made to make us empathize with squares and rectangles, then you should play Thomas was Alone.

We should be thankful for the people out there who chose to remain in peace on this Attention War.