When thinking about themes for story-driven games with choice mechanics, I can hardly think about one that fits better than helping a civilization gain the right to choose their future.

Yep, Detroit is a game where theme and mechanics flow wonderfully together, exploring all the scenarios that are related to the nature of choice itself.

Throughout the different story lines and chapters, you’ll repeatedly take part in dynamics such as: 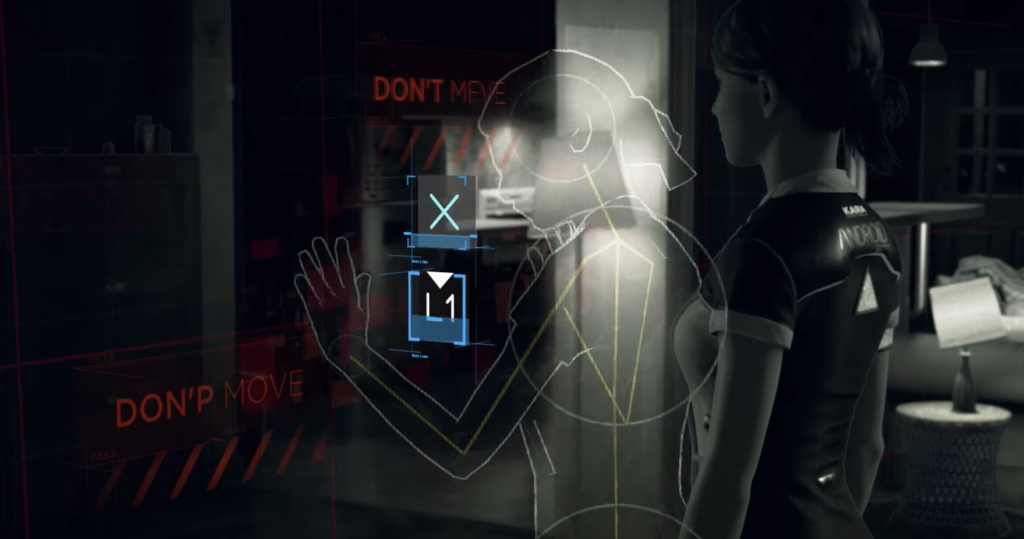 This powerful visual metaphor of breaking the wall is also telling the player about the irreversible quality of that specific choice, which is, in my opinion, one of the most important qualities that defines relevant choices. Which brings me to…

About relevant and irrelevant choices

It’s funny that the sequence that opens the game is a message of a character directly prompting the player to let them know how relevant their choices will be in the story.

Which might seem like a superfluous statement, or… just the way in which Quantic Dream is warning the sceptical player that this is not another unfulfilled promise where no agency is allowed. You’re basically being told: “you better think well about what you choose in this game, because this time, there’s quite a bit at stakes”.

Which also brings me to the next point:

For the player to believe the choice is relevant, there needs to be some kind of validation.

This means there needs to be smaller or bigger turning points where whatever happens  couldn’t have happened if that specific choice hadn’t been made in the past.

I dare saying those turning points shouldn’t be purely aesthetic or plain reactions, but they need to have some emotional relevance.

For example, if we are Connor and we decide to persist in communicating with lieutenant Anderson despite he clearly despises us, Anderson should slowly star showing some tolerance to Connor, even if it’s out of exasperation. 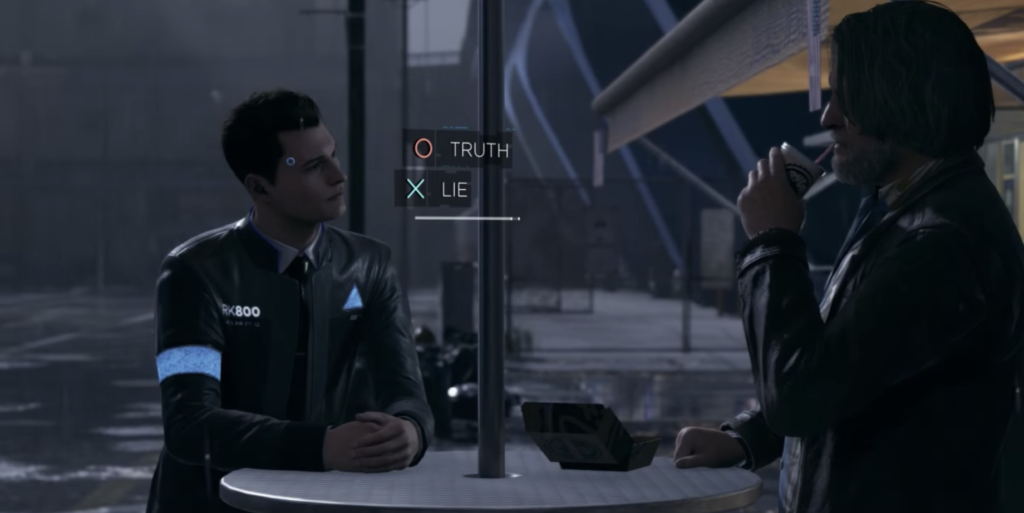 As I progressed in Detroit, I felt like the crit path could have only been sorted out after the designer’s desired progression in choices relevance.

For so different choices to fit naturally into the player’s experience, there needs to have been a special care put on balancing the emotional difficulty of making those choices.

Also, for all the choices to be that consistently relevant throughout the story lines, I can only assume there was certain overall pace previously designed to guide the story development. As in any other genre of video games, I believe there’s been some balancing work done here, the figure of something like a choice balancer.

I also liked how choices never seem to be wrong or right, just different ways to approach reality; and I never felt compelled to choose one or another solution, neither judged for the mistakes I could have made. Such is life. There’s no right universal answer. You just need to be brave enough to choose with path to follow.

The choice of the designer

Whenever I talk with someone about choices in story-driven games, conversations usually boil down to how much branching is doable from a production point of view, and not so much to what is better for the player’s experience. Which is a bit sad, but actually, understandable taking into consideration how fast branching scales up costs. 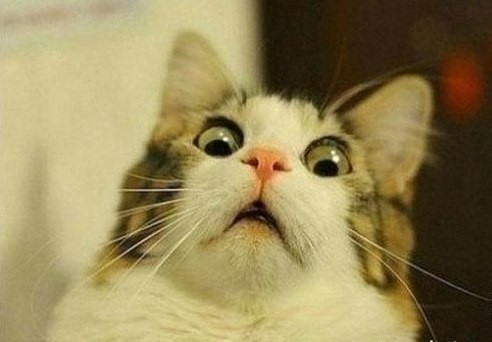 The producer of a game when you tell them you want choices to be relevant. Also, a random picture of a cat.

So then, the designer him/herself needs to choose. How am I going to design this experience? Do I want to branch at all? Do I have enough with just simulating a feeling of choice? I think Quantic Dream’s people just committed to letting people enjoy as much agency as they could handle. Choices, applied in a coherent direction to bring a character in one specific direction, do get validated in the longest term possible, which is the resolution of the arc.

The outcome of all this extra work is that the player does feel in control. Therefore, they do feel emotionally connected with the characters at a deeper level. The feeling is comparable, I think, to give some piece of advice to a friend. You try to be careful, because you basically don’t want to ruin people’s life. At the same time, if things go well for your friend, you share that feeling of accomplishment and are empowered to keep on spreading your positive influence in the world.