And to make the challenge even more exciting, I added my own two random elements:

The boy’s breathing was deep and sweet when a gust of wind entered the room and touched his eyelids. He got stuck for a moment between wakefulness and sleep until he remembered he had not left the window opened that night, and his eyes opened wide. He reached for the nightstand and put his glasses on.

He sat down on his bed and peered into the darkness until his eyes got used to the lack of light, and then, he saw them: two specks of red light right in the middle of the room, suspended in silence. 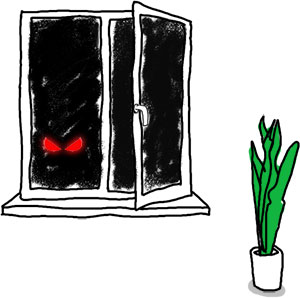 First the Shadow purred gently so that the boy felt his presence, so that his blood began to flow into his head like an avalanche and so he could feel the taste of fear. Then it took a step toward the bed and something sharp and frightening as jaws sparkled and opened wider and wider, and then the figure grew and rose to the ceiling, and the purr became a roar and the red capillaries inside the eyes beat violently, and then… then the boy said:

“Good evening, how I can help you?”

There was a slight hesitation in the Shadow, and for a moment there was no sound at all, no movement, no air stirring the curtains, and absolutely everything in that room kept its breathing.

“Can I do something for you?” the boy insisted.

And then it seemed that the two round and sinister eyeballs looked sideways to one way and the other, and the roar became a sort of questioning grunt.

The boy’s eyes examined the Shadow eyes, raised his eyebrows as if he had suddently noticed something, and spoke in a condescending tone:

“Oh! Sorry, I thought you would be a friend of my father.”

By this time the monster had shrunk to its original size, and it happened to be not much bigger than a ten year old girl, although it has to be said that its eyes remained considerably terrifying.

“Bggrrrr,” it said, or what is the same (in the language of the Bogeymen): No, I’ve come to take you! And he stretched out the last syllable, but even though the voice was creepy and the acoustics of the room even gave it some extra reverberant quality, the exclamation broke at some point and the result was actually sort of clumsy.

“See,“ the boy began, in an explanatory tone of voice. “My dad’s a publicist and I’m so used to seeing all kinds of people around… I’m really sorry, it was my mistake. Anyway… With whom do I have the pleasure of speaking?”

“Grrrrr,” meaning: I’m the Bogeyman and I’ll eat you. And this time it really tried hard to sound scary, and apparently it worked, because the boy actually moved back when he felt a shady puff of air in the face.

“Oh,” he said. “Sure. And that really pleases me, but… excuse me again, what do you exactly do?”

And when they heard this, the eyes frowned as if they had felt a stabbing pain (or they would have if they had had face).

The Bogeyman blinked and opened and closed his mouth several times (if he had had one of those).

“I… well, I must apologize…” the boy said. “Something tells me I should recognize you, but… I’m sure it’s just me. Yes, it’s just I’m a little distracted…” he tapped his head. “However… May I ask you… Do you possibly have some kind of positioning trouble issue?”

The Bogeyman grunted in doubt.

“Yes, I’m sure your service is excellent and you are so passionate about what you do, but sometimes that’s not enough. This is such a competitive market, with so great guys out there, you know, like Freddy Krueger, Slender Man… all kinds of scary ghosts and clowns and monsters under the bed and so on and on (and I’m not even considering local figures). In my opinion, you can’t just settle for anything: you have to shape a strong profile, capable of competing with the best” The boy took air before continuing, “Bad news is that the situation can worsen pretty fast.”

Something held its breath.

“But, on the other side, I think you should be able to, somehow, redefine yourself.”p>

And then, a sigh of relief.

“Yeah, maybe there’s hope for you. I mean, I think you should start working on your Hell Creature Positioning Marketing Plan ASAP.”

The boy got out of his bed and went to get something to his desk, and it seemed that the Shadow became tense and started to stare in an intimidating way again, but then it saw that he was just bringing his tablet.

“I’ll tell you what we’ll do,” the boy said, sliding his finger across the screen frantically. “I can provide you with the planification of a comprehensive Online Positioning Action Plan together with some off-the-line special strategies for a special price.”

The Bogeyman seemed to squint and nod slightly.

“Even though, you see…” the boy said, and the dark and fearsome figure from hell held its breath again, expectantly. “I could help you strengthen your public image, but… You’re the first one who should… You know, today you have to think of the market as in a flow of exchanges among its participants. And if you want to compete and win the public favour, you must provide value to that flow in the first place.” The boy continued, and the figure nodded quickly again. “In short, before fully trust another person something as important as your image, you should take a moment for some self-analysis and clarify your own ideas. And don’t worry, the process may take a considerable time, but after a while you’ll find it helpful, I assure you. So now, what I want you to do is to flight out of that window and ask yourself: Where am I? Where do I want to go? How should I do to reach that? And when you have the answers to those questions,“ The boy raised a finger, “and only then, you will be ready to follow a professional advice.”

The Bogeyman kept a long silence until the boy looked sideways to the Adventure Time digital clock and cleared his throat loudly.

“Well, I appreciate your visit and I hope you don’t approach this issue as a problem but as an opportunity.”

The boy got out of the bed and walked to the closet, where he was looking for something until he came back holding an amazing t-shirt with a drawing of an old car and a rainbow in the background.

“This is just a gift for coming. Thank you and I hope you have a good night.” 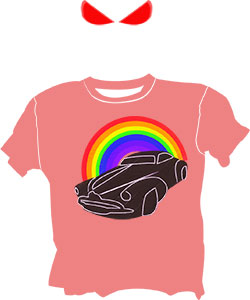 The boy stood with his arms resting on his lap and the Bogeyman didn’t feel entirely comfortable. The Lord of Shadows and Despair put the t-shirt on awkwardly and shake the hand the boy offered him. It went to the window and turned around and stared at him for a while, in confusion, before leaving the room with a dull grunt.

Thank you for reading, leave a comment if you liked it!