I was instantly inspired and delighted when I saw Hidden Folks for the first time.

It took place like a “boy/girl falls in love with boy/girl” scene, where you just see him/her at the other side of the room at a party (or Gamescom indie booth in this case), and you instantly realize you’re just meant for each other.

You do what’s possible to get the contact details to stay in touch (or these amazing promo cards), and then you start hoping you’ll cross paths again soon. 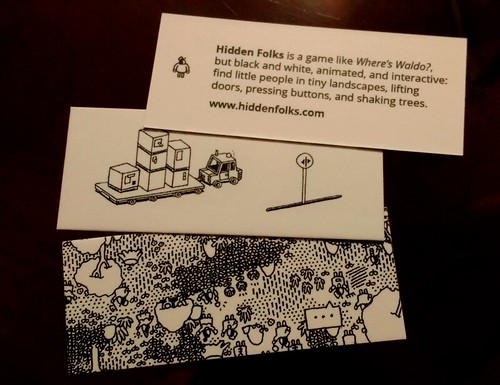 And what’s more… I’ll tell you a secret! I was so inspired by that little demo I played at Gamescom that it gave me the idea of taking the Hidden object genre to start working on my little experiment Lost Stuff.

So when you are paying little more than 3€ on the App Store and they give you this little gem in exchange, you just feel you need to follow up those guys on Twitter or something, hoping you manage to return them at least one tiny little portion of the love you felt they put on their game.

When showing Hidden Folks to some colleagues who didn’t know about it, I some times get comments of the sort of: “Oh, it’s like Where’s Waldo“. But hey, I think it’s worth it to look at Hidden Folks by what makes it special. And so, I would highlight:

With controls, you just tap and you swipe. That’s the way you explore everything, but yet, you get a bunch of different reactions from the stuff on the layout, and it keeps surprising you.

I hope I’m not being too illegal by posting this… Anyway, isn’t it cute?!

It’s simple, but it keeps you engaged in this little tiny world you just don’t want to leave. The continuous sonorous and visual rewards after each interaction traps you into a compulsive tapping routine, and absorbs you until the level is completed. And oh boy, do levels get difficult to complete!

What’s to be improved?

What else to say? The credits screen is pure bliss. And I hope they got enough money to launch more games. However, if I was the developer and could do something about it, I would maybe make the background story a bit stronger on future chapters.

They already have a few interlude levels which hint the story of a folk who travels the world, but why not taking that potential and turning it into something even more engaging? Then I would have more reasons to keep on playing besides the engaging art and gameplay. I would be curious.

Now go and love this game.