I think in general, when we’re engaging in an activity, it’s easy to identify what engages us and what doesn’t, but are we equally aware of how do those desires form exactly? What types of motivations are there? How can we leverage them? And what are the implications of each of them?

In an attempt to try and apply these concepts into the work I do as a F2P game designer, and with the goal of clarifying them for myself, I observed how it works on a popular game as Candy Crush, and did a thought and design exercise at the end as a bit of a twist.

But first, a bit of theory.

END_OF_DOCUMENT_TOKEN_TO_BE_REPLACED

With so many bad news going on in the world recently, it was difficult to get a positive balance out of the year 2020 when I tried to think about approaches for this article.

But then it struck me that next year, 2021, it’s actually the 10th year anniversary of my jump into the mobile casual game industry. And this is such a fast-paced industry that, even though it’s been only one decade, I feel like I’ve already made a few learnings that would be worth sharing here.

So, let’s start with one of the biggest cliches, but also the most dominant force that defines the reality we face as game developers.

1. Things in the industry change. And they do it fast.

When I joined 5 Ants (developers, between others, of Tiny Thief), it had only been three years since the App Store emerged. So it’s easy to imagine that a few things might have changed since then. But back in the day, it wasn’t actually as obvious to foresee what types of new challenges markets or technology were going to present to the studios that were making and publishing games.

END_OF_DOCUMENT_TOKEN_TO_BE_REPLACED

Here’s a story that had been going around in my head for a long time. For some reason, it finally clicked in my mind, and I could recently connect all the loose ends.

Now here it is finally, in such times as we are living, a story about global crisis, about finding one’s place in life, and about a cat.

I’ve recently been interested in the way branching (or not so branching) choices can be applied not to plot, but to define context and tone in interactive experiences.

Here’s a tiny little experiment I made with Twine>> http://nadiaorenes.es/in-crescendo.html

I’d like to keep on exploring how to use, as a way to engage players, resonance and emotional immersion.

Another year coming to an end, and my contribution to the universal pool of knowledge is just another list with games I played during the year, together with some comments where I explain what I found remarkable from a design point of view.

Although some of them just came fresh out of the oven in 2019, others were just serendipitous discoveries or recommendations of not so new titles.

END_OF_DOCUMENT_TOKEN_TO_BE_REPLACED

Antichamber is a first person view puzzle platform game that was released in 2013 by Alexander Bruce.

There are quite some things that turn this game into an elegant work of game design, but I’d like to focus on how the game mechanics are wrapped up with thematic sense allowing for a memorable experience.

END_OF_DOCUMENT_TOKEN_TO_BE_REPLACED

I was recently lucky enough to come across a hidden gem in narrative driven puzzle games called Sexy Brutale. Here’s a small teaser:

The game, developed by Cavalier Games in collaboration with Tequila Works, delights with its cheeky art style, polished UX, and a very peculiar atmosphere and sense of humor. However, it’s the narrative implementation that I found remarkable and I’d like to analyze in this article.

OMG! CAREFUL! LOTS OF SPOILERS AHEAD!

END_OF_DOCUMENT_TOKEN_TO_BE_REPLACED

Before I tried Cuphead I was always very curious about the criticism the game always got for being extremely difficult. I couldn’t believe that the developers, who seemed to have spent quite some time and effort in building such a big thing, would just mess up with a basic principle of game design such as balancing.

I had also heard about the hypothesis that by making the game purposely difficult, the developers would manage stretching out the limited content of the game so that it felt like more to the player.

After playing Cuphead myself, though, and even considering that production limitations might have been part of it, I think that looking at the way difficulty is formulated as a design pillar, and how consistently that vision executed, Cuphead it a greatly designed game in its own terms.

For me Cuphead is, basically, a statement on difficulty.

END_OF_DOCUMENT_TOKEN_TO_BE_REPLACED

Gris, by Nomada Studio, is a platform game with art of paralyzing beauty, and visual and design influences taken from games such as Monument Valley or Journey.

The narrative doesn’t carry the weight of a heavy plot, but it rather develops some themes through cinematics, and exposing certain motifs in its gameplay, by using resources like color, light, or physical distance.

In this analysis I’d like to focus in the latest. How can a game like Gris make, not only a skilful, but also a meaningful use of distance, which we usually take for granted as a property of space and a basic component of the game feel, but rarely as an entry point for thematic exploration?

END_OF_DOCUMENT_TOKEN_TO_BE_REPLACED 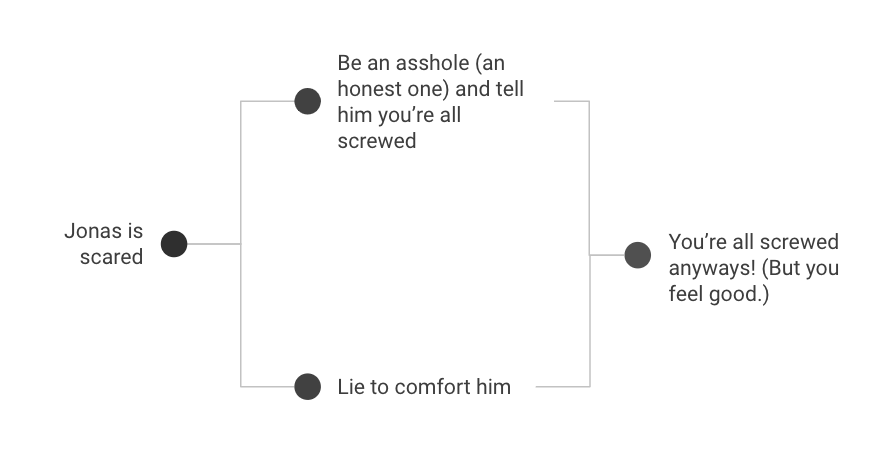 I’m always surprised by how differently story-driven games with mechanics where content branches approach their narrative design. Each game seems to have its own understanding and implementation of what the player will feel is a satisfying experience.

There are only certain types of systems in video games where choices and branching have been implemented successfully, at least so far. Based on where the player agency is in a game, I think most of the times choices are: